I led a 50-or-so minute discussion session based on this at an inter-community tikkun leil shavuot June 9th in Seattle. Enjoy.
The book of Ruth is a story about a family of choice, and how it was formed; how a queer migrant became Jewish. After a loss, two women cleave to each other and work together to subvert social norms and expectations of family, as well as rules around property ownership, in order for them to stay together.
The specific concept and verbiage of family of choice was coined by Kath Weston in 1991 as "kinship practices and feelings that do not depend on biological filiations and are not based on reproduction". The concept of family being not-only-blood, not-only-marriage, has existed especially in queer circles for much longer. We exist often exist on the edges of society, and we support each other (hopefully) and tend to cluster, and as such we have always built families and social groups outside the norm.
Sometimes queer family ignores "official" family markers, but sometimes it directly subverts them. Before they could get married, gay men in the AIDS crisis sometimes adopted a younger partner so they’d have a legal family tie that overrode their family of origin. Queer family looks like Freddie Mercury declaring he’s his friend’s new mother after said friend’s birth mother passed away. Queer family is a couple’s additional partners coming together to celebrate and/or officiate their marriage. Queer family is taking in kids you’re not blood-related to who were kicked out of their homes for being gay. Queer family is buying a house so you have a rotating free guest room for whoever needs it this month, free of charge.
Queer readings of Ruth are classic, but tend to focus exclusively on the feelings and love between Ruth and Naomi. I prefer to focus on the next steps: what did they do with that love? What choices did they make when confronted with the oppressive social expectations of the time?
In the beginning of the story, Naomi is devastated. She just lost her family. She is in crisis. Ruth sees this and needs to communicate that she has not lost her entire family, and expresses her devotion in 1:16-17. This sometimes gets interpreted as romantic only, or out of love for the jewish people only; to me, it reads as both. No matter your view of the feelings between these two women, this pledge is an expression of love and of intention stay with Naomi for her life and beyond, to keep building the family as it stands rather than going home to start over. 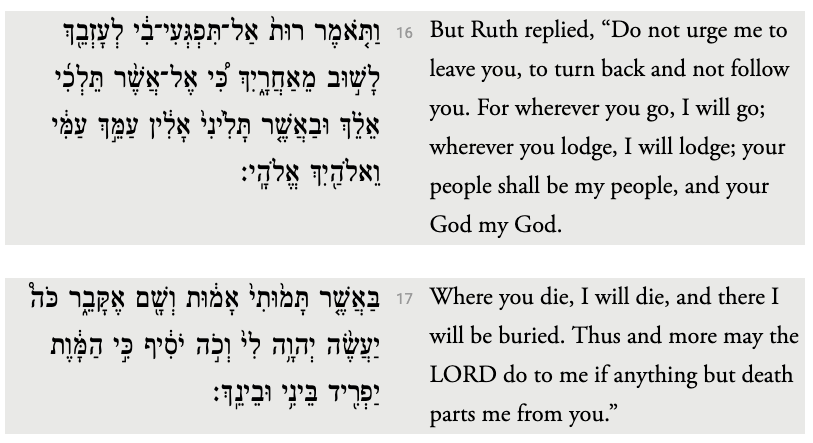 Screenshot taken from https://www.sefaria.org/Ruth.1.16-17?lang=bi&with=all&lang2=en
Even with all that, Naomi’s sad and still wants to go home. She renames herself Mara, sees herself as a bitter old woman, and keeps going forward while trying to figure out how to keep everyone alive and happy as best she can.
There is a problem: women can’t own property. Naomi and Ruth, as women unattached to men, are in danger of losing everything they have. So Naomi plans for Ruth to hook up with and possibly marry Boaz, her relative who’s a pretty good dude. She sends her to him, they have sex, and also a conversation.
There’s a linguistic quirk in this conversation. Boaz says to Ruth: I was told everything you did for Naomi. But when he says that, the word told is repeated. The rabbis point this out and have a whole discussion about it, but my interpretation is a little different. Part of existing queerly is hearing unsaid implications and speaking a hidden language. I was told, and i was told: i heard the surface level, and also what was actually said. I understand you and Naomi are close. I understand you are dedicated to her, and to our ways.
We all have complicated methods of negotiating safety and unsafety. We say "are you family" instead of "are you gay." Sometimes we can’t hold hands in public with our loved ones. Sometimes we introduce partners as friends or friends as partners. Sometimes these categories themselves blur. Sometimes we imply as subtly as we can that we see each other’s truth, piece by piece: I like your hair. Nice (rainbow) pin. Dropping hints about girlfriends or a same-gender spouse to open the conversation and create an environment of safety. I was told—and I was told. I hear you—and I hear you.
Also during this conversation, Boaz points out there’s a closer relative, who’d be a more legally sound choice to marry and keep property in the family. Boaz has treated Ruth well; he treats his workers well; his workers treat Ruth well. We do not know if this other relative would do so, but Boaz is not vulnerable the way Ruth would be. He has the power to be seen as a person in ways they do not, and wants to participate in the group mission of keeping Naomi’s property in the family but in as above-board a way as possible.
So anyway, Boaz talks to the closer relative who is like "fuck that i’m not sleeping with HER" using language of impurity. The closer relative doesn’t want THAT woman, the one who’s foreign, the one who’s so close to Naomi. He doesn’t want the impropriety sullying his genetic line. Boaz at this point basically goes "well, your loss, my gain," and Bigot McRelativeSon is forgotten to the annals of history and doesn’t even get a name, just referred to as ploni almoni (hebrew for joe schmo).
Later, Ruth gets pregnant and gives birth. All the women are thrilled and say "Naomi your kallah (either daughter in law or young bride) loves you and is so good to you!" The baby gets passed to Naomi! Naomi nurses the baby! The women say "a son is born to Naomi!" Boaz is not mentioned, really, but in my mind he’s off minding his own business in the fields and threshing floor and nobody’s bugging him about getting married or producing heirs anymore.
They have, Ruth and Naomi and Boaz, built a family that fills everyone’s needs together. Ruth is married, so the property can stay in the family. Naomi raises the child birthed by Ruth, conceived by Boaz and Ruth’s marriage, or the three of them do as a family, maybe.
In a fuck-you to traditional bloodlines, and to the idea that they are all straight normal people all the way down, that child Obed was King David’s Grandfather. King David, whose love of his friend Jonathan was greater than his love for women. King David, whose line will bring about the Moshiach. We are here; we have always been here; we are important; we will always be important. Families that differ from the way families are expected to look have always been crucial in Judaism. We need to support and accept them not despite their differences, but because of them; both because it is the right thing to do and because queer families are crucial to our ancestral tradition and heritage.
Queerness, Jewish, Ruth, Family